Gulfstream Park West will have an 8 race card on Thursday, with a first post time of 1:15 PM. It will be the 11th day of the G.P. West meet, with about 30 race days to go.

The odds were very low on the winners Wednesday, resulting in measly payouts on the late wagers. The highest odds horse was 5.7:1 in the 7th race, which also was the high odds for the 8 races.

The Rainbow carryover is $19,350, not growing much in this meet thus far, as the jackpot has been hit three times.

More 2 year-old races are hitting the track is one reason. Five of those races were run Wednesday, and two are on the Thursday card (races 1,2). 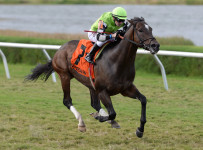