Live racing will resume on Wednesday at the Gulfstream Park West meet with eight races and first post of 1:15 p.m.

The GP West meet is at Calder in Miami Gardens, and is run by Gulfstream Park under a lease agreement

The only carryover on Wednesday is on the Rainbow 6, at $61,147.  It will be on races three  through eight with the sequence scheduled to  start at 2:19 p.m.

On Sunday, the most recent GP West race day, the big focus was on the Late Pick 5 on which there was a two-day coming-in  carryover of $86,095.

Sunday’s wagering on the Late Pick 5 was $378,930–one of the largest ever for that bet at a Gulfstream meet other than its championship meet.

The payoff was $1,241.55 on the minimum 50-cent bet.  The number of winning tickets was not readily available.

Sunday was the seventh straight day without just one Rainbow 6 ticket with all six winners.  Thus the carryover continues.

Sunday’s wagering on the Rainbow 6 was $61,600. Of that GP West took out 20 percent, divided 56 percent among tickets with six winners and added 24 percent to the carryover. 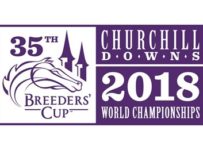