The Gulfstream Park West meet, held at Calder, is dark this Monday and Tuesday and will resume on Wednesday  with eight races and first  post of 1:15 p.m.
The carryover on the Rainbow 6 will be $14,224. It  will be on races three through eight, with the sequence scheduled to start at 2:21 p.m.
On Sunday, there were five Rainbow 6 tickets with all six winners. Each ticket paid  $3,121 on the  20-cent only bet.
Program numbers of the winning horses were  11-10-8-2-1-3.  Two winners were favorites, and all other winners were 9-1 or lower.
The six races had 61 starters—adding to the difficulty of the wager.

Sunday’s wagering on the Rainbow 6 was $33,449.  Of that, GP West took out 20  percent, divided 56 percent among tickets with six winners and added 24 percent to the carryover. 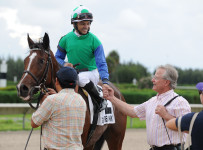