There was just one winning ticket on the Rainbow 6 at the Gulfstream Park West meet on Sunday, and it paid $20,322.40 on the 20-cent only bet.

GP West began a new Rainbow 6 pool on Sunday. That followed a Saturday when there also was just one ticket with the winning horses in all six Rainbow 6 races.

The GP West meet, held at  Calder, will resume on Wednesday with eight  races and first post at 1:15 p.m.\

There will be a new pool on the Rainbow 6. It will be on races three  to eight, with the sequence scheduled to start at 2:19 p.m.

GP West took out the standard 20 percent and paid the rest back on the winning ticket. 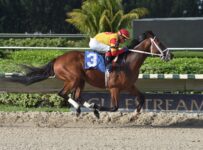