Monday is Labor Day and Gulfstream Park will observe it with a 12-race card and first post of 12:45 p.m.

There are no stakes races on the card—which will be run on a day when a tropical weather system will be moving through South Florida.

It will follow a Sunday when Lipstick City won the feature $75,000 Wasted Tears Stakes, which was moved from turf to dirt because of rain.

For Monday, weather forecasters expect that rain will be heavy at times through early evening. That makes it almost certain that all five scheduled-for-turf races will be moved to the dirt track—which no doubt will be listed as sloppy and will be sealed.

Two of Monday’s scheduled for turf races, the ninth and 12th, are part of the Rainbow 6.

The six races have 55 entrants. The expected foul weather could lead to numerous scratches.

On Sunday, rain forced Gulfstream to move  all six scheduled for turf races to the dirt track that was listed as sloppy and was sealed. Gulfstream announced that switch in late morning, giving bettors ample time to adjust their handicapping.

There were nine tickets with the winners of all six Rainbow 6 races. Each received $3,560.88 on the 20-cent only bet.

Going into the 12th and final race, there were 28 live tickets.  The race was won by Permitted, the 6-5 favorite in the nine-horse field. Surprisingly, nineteen of the live tickets did not include Permitted.

*Lipstick City rolled to a 6 ¾-length victory in the Wasted Tears while making her main-track debut in the 1 1/16-mile stakes for fillies and mares.

Trainer David Fawkes and owners Steve Laymon, Will Robbins, Richard Broadbent IV and Bill Robbins made the decision to go ahead and run based on the breeding of the 4-year-old filly, who is by City Zip out of an A.P. Indy mare.

“We made the right call,” Fawkes said. “When we saw the weather coming earlier in the week we talked about it. Her Tomlinson [off-track figure] was good, and I said, ‘It could open up new doors.”

Lipstick City, a multiple stakes winner on turf, rated behind the pace set by Tiffany Case and stalked by 6-5 favorite Spanish Harlem, who showed the way around the first turn and along the backstretch while setting fractions of 24.61 (seconds) and 49.03 for the first half mile.

Spanish Harlem made the first run at the pacesetter on the far turn and took over the lead leaving the turn into the homestretch as Lipstick City loomed dangerously on her outside.

Lipstick City, the 7-2 third betting choice ridden by Nik Juarez, skipped over the sloppy track to draw off to a commanding score.

The field was reduced from a possible thirteen horses due to scratches, mostly weather-related. 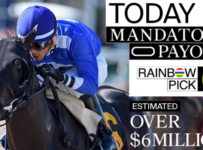