Archer Road will be asked to cut back to 1 1/16 miles for a start in the The Vid after breaking through with a stakes victory in the 1 ½-mile Copingaway July 28 at Gulfstream.

The long-striding 4-year-old son of Leroidesanimaux worked his way through heavy traffic under Jeffrey Sanchez while rallying from eighth to prevail by a half-length in the Copingaway.

“I was looking to go a mile and a half with him. He had some trouble but we got lucky and got there,” trainer Stan Gold said.

Arindel is owned by the family of Alan Cohen, a former majority owner of the Florida Panthers Hockey Team.

Archer Road has won three of his last four starts, scoring at a mile and 1 1/16 miles, in addition to the 1 ½ miles of his stakes win. Sanchez will need to adapt to the 1 1/16 miles aboard Archer Road.

Perhaps due to the distance factor, Gulfstream linemaker Jay Stone has listed Archer Road at 8-1 in the morning line.

Costa Brava’s Conquest Sandman has been installed as the 6-5 favorite after winning the 1 1/8-mile Mecke July 8 at Gulfstream. The 5-year-old gelded son of Scat Daddy has won three stakes since being claimed for $16,000 Feb. 10.

The Juan Carlos Abarrio – trained turf star will be ridden back by Emisael Jaramillo.

Hickory Woods Farm’s One of a Kind enters the The Vid in extremely sharp form for trainer David Kassen. The 4-year-old son of Lemon Drop Kid, who was claimed for $16,000 March 11, has won three times and finished second twice in five starts for his new connections.

Most recently, One of a Kind fell a nose short of catching Grade 1 stakes-placed Kroy in an optional claiming allowance. Tyler Gaffalione has been named to ride the Florida-bred colt. One of a Kind is the 9-5 second choice in the morning line.

Rounding out the field: Durocher, Salute the Colonel, Erasmo’s Dream and Diamond Bachelor. Local Hero is a main-track-only entrant.

Reeves Thoroughbred Racing and R. A. Hill Stable’s Leitone, who finished second behind multiple graded-stakes winner Gunnevera in his U.S. debut, returns to action in the Mo Exception.

The Kathy Ritvo-trained Leitone raced evenly to finish a well-beaten second in the Aug. 10 optional claiming allowance at Gulfstream won convincingly by Gunnevera, who went on to finish second in last Saturday’s Woodward (G1) at Saratoga.  The Chilean-bred 4-year-old son of Dunkirk, who hadn’t seen action since winning the El Derby (G1) on turf Feb. 4 at Valparaiso, is a Group 1 winner on dirt as well as on turf.

Tyler Gaffalione has the mount aboard Leitone.

Ricardo Vallejo’s Deland rates as the horse to beat in the Mo Exception looking to his recent victory in the one-mile Coast Is Clear Stakes July 22 at Gulfstream Park. The two-length score came in the 6-year-old son of Gottcha Gold’s fourth U.S. start after distinguishing himself as a Grade 1 winner in Puerto Rico.

Emisael Jaramillo has the return mount aboard the 8-5 morning-line favorite.

Trainer Antonio Sano, who saddled Gunnevera for his runner-up finish in the Woodward, is scheduled to send out Hy Riverside, who registered an allowance victory over Deland before finishing third behind him in the Coast Is Clear.

Sano also has Hy Kodiak Warrior, a stakes-placed 7-year-old son of Kodiak Cowboy, in the race.

Millionaire Runner and The Best Candy round out the field. 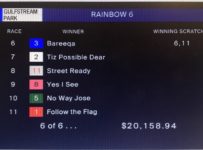