Gulfstream Park is back on the turf on Thursday with the course listed as firm and the dirt track listed as fast.

The second, fourth, sixth and ninth races are scheduled for the turf.

Gulfstream has not had live racing since Sunday, when wet conditions forced it to  move all five scheduled for turf races to the dirt.

Sunday was the 44th day of Gulfstream’s summer meet.  Through that day, it has moved 65 of its 211 scheduled-for-turf races to dirt due to rain and wet conditions.

At its 57-day summer meet in 2016, Gulfstream had 296 scheduled-for-turf races and moved only six to dirt. 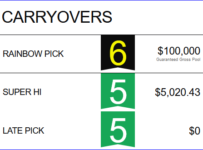