Gulfstream Park on Saturday will hold the first two races in the 2018 Florida Sire Stakes Series for two-year-olds.

We will have previews of the Florida Sire Stakes races on Saturday morning and race coverage on Saturday afternoon.

The FSS is sponsored by the Ocala-based Florida Thoroughbred Breeders’ and Owners’ Association (FTBOA), which is the sole provider of purses for races in the series.

The FSS races are restricted to sons and daughters of Florida-registered stallions whose owners have nominated them for the series.

The FSS  will continue at Gulfstream on Sept. 1 with the $200,000 Affirmed for males and the $200,000 Susan’s Girl for fillies. Both races will be seven furlongs on dirt. 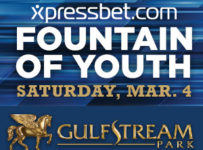