Gulfstream Park is back on the turf Thursday, with a nine-race card that began at 1:15 p.m.

Thursday is the first of five straight days of live racing at Gulfstream. It will host racing on Monday, May 28,
Memorial Day – adding that to its regular Thursday-through-Sunday spring meet schedule.

The first, fifth, seventh and ninth races are scheduled for turf. All those races

with the portable rail at 96 feet.

Those would be the first races at Gulfstream since last Thursday May17. 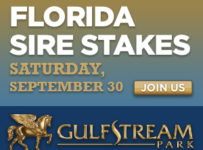