Mendelssohn was released from quarantine on Thursday morning and then set foot for the first time on the track at Churchill Downs, where he is scheduled to run in Saturday’s Kentucky Derby.

Mendelssohn went to the track, for jogging with three tablemates that with him were flown from England to Louisville, Ky., early this week.

He won by 18 lengths. But he will face a stronger filed in the 1 ¼ mile Kentucky Derby.

In his only race in the United States, he won the Breeders’ Cup Juvenile Turf (Grade 1) at Del Mar last Nov. 4.  He is trained by Aiden O’Brien for owners Derrick Smith, Mrs. John Maigner and Michael Tabor.

Mendelssohn is in post 14 and is the 5-1 second choice in the morning line,  Regular  jockey Ryan Moore has the mount.

Justify is the 3-1 morning line favorite and is in post seven.  He is unbeaten in three starts, including the 1 1/8 mile Santa Anita Derby (Grade 1) on April 7. Mike Smith has the mount for trainer Bob Baffert. 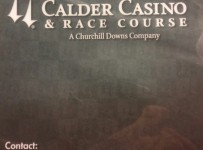