Gulfstream Park and Tampa Bay Downs will resume racing on Wednesday, and both are preparing for stakes races on the upcoming weekend.

At Gulfstream, there also is excitement about a Rainbow 6 carryover that has grown to almost $3.8 million. And there is the prospect that Gulfstream will schedule a mandatory payout of the carryover on Saturday March 31, which is Florida Derby day.

On Wednesday, Gulfstream’s first post will be 12:35 p.m. for a ten-race card.

The Rainbow 6 has gone 36 days without the jackpot/carryover payoff requirement of just one ticket with the winners of all six races.

On each of those days, Gulfstream has taken out 20 percent of the day’s new Rainbow 6 bets, while dividing 56 percent among tickets with all six winners and adding 24 percent to the carryover.

On Wednesday’s first race, Gulfstream has a carryover of $11,015 on the Super Hi-5.We will have additional details on the Rainbow 6 on Tuesday—including analysis of how the carryover has grown and a look at Wednesday’s races.

On Wednesday, Tampa Bay has nine races with first post of 12:50 p.m. There are no carryovers on the card.

On Sunday March 25, Tampa Bay will have its annual Florida Cup Day with six stakes races.  All six have $100,000 purses and are restricted to Florida breds.

On Thursday afternoon, Tampa Bay will draw entries for its Sunday card.

Gulfstream will have two stakes races on Saturday March24,

Gulfstream will draw and announce entries late Wednesday afternoon for its Saturday card. 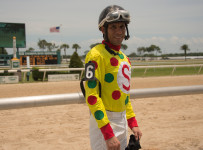