Racing is underway on Sunday at both Florida thoroughbred tracks.

Coverage  of  both tracks is on our blog, which may  be accessed on the menu bar at the top of the home page of this Web site.

It  will follow a Saturday of record handle at Tampa Bay, and continued strong handle at  Gulfstream.

On its annual Festival Day with five stakes races, Tampa Bay set its single-day record for all-sources handle with $14,859,433 for 12 races.

As we have reported, Gulfstream is on pace to break its  record for a meet’s  daily average all-sources handle. That rerd is $10.0 million, set during its 2016-2017 championship meet,

Flameaway finished second, followed by World of Trouble in the 1 1/6 mile race for 3-year-olds.

Quip earned 50 Kentucky  Derby qualifying points, and that ensures him a spot in that race that will be on May 5 at Churchill Downs in Louisville, Ky.

On Sunday evening, we will have results and analysis of all oi Saturday’s Florida stakes races. 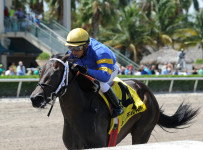