Tampa Bay Downs will present a trio of Stakes events Saturday. The first will take place in the third  race, the $125,000 Gasparilla Stakes for sophomore fillies at seven furlongs. A field of six is entered.

These half-dozen runners can be separated into two groups, contenders and hopefuls. Contenders      are those who have won another race after breaking their Maiden. Hopefuls are the ones who have recently won their Maiden and are trying their luck against winners.

ALMOND ROCA (2) tops the list of contenders. Her 9 length blow out in the local Sandpiper Stakes makes her the one to beat. The only question could be the stretch to seven panels. Pedro Morales      has the return call for Graham Motion.

HOMEMADE SALSA (3) from the Mike Maker barn is the other stakes winner in this contest. She took  the $75,000 Juvenile Fillies Turf Stakes for Florida-breds at Gulfstream Park West back in November.  She has yet to set a hoof on the Tampa track, we’ll see how she likes the Oldsmar oval. Last season’s   top jock Daniel Centeno picks up the mount.

PASSION PLUS (6) is undefeated (2 for 2) in her young career for veteran conditioner Tony Granitz.      She must step up to meet stakes foes here and also tries dirt for the first time. This filly has had a        pair of works over the Tampa track since December including a bullet move on January 2nd, 4 furlongs    in 47.4. Manny Cruz rides her for the first time.

CLEARWATER (4) graduated in a local Maiden Special sprint on December 16, and appears to be a bit    of an outsider here for Tim Hamm and Ron Allen Jr. Finally, there is BARRIER ISLAND (5) who won her third start at a mile at Gulfstream on December 17th for Shug McGaughey. Journeyman Manny Franco ships in for the assignment. This lass is another who has never been on the Tampa track before.

Race 8 is the venue for the $125,000 Pasco Stakes, also at a distance of seven furlongs. Ten three-year olds are to start. WORLD OF TROUBLE (7) is the expected favorite and seems to be getting top billing, although he will have to earn this victory from some worthy opponents. Leading jockey Tony Gallardo   is up for Jason Service.

AWAKEN (8) is a dual stakes winner for trainer Tim Hamm, having won a pair of restricted Stakes for Ohio-breds. This colt means business, he sports a tally of 3 wins, 1 place and 1 show from 5 starts.      Has 5 works over the Tampa track, Pedro Morales takes the mount for the first time.

HE HATE ME (1) is undefeated (2 for 2) and a stakes winner, winning Belmont’s $75,000 Tremont           at 5 1/2 furlongs last June 19th. He has been away since then and has worked seven times at Prairie Meadows for Horacio DePaz, prepping for the stretch to seven panels. Manny Franco will be aboard    for this colts first Tampa att

The $50,000 Wayward Lass Stakes showcasing older fillies and mares at a mile-and-one-sixteenth, happens in Race 10. TAPA TAPA TAPA (2) will be a tough customer, boasting a 2 for 2 record in Tampa, including last season’s edition of the Suncoast Stakes. Her favorite rider Pablo Morales is up for Tim Hamm. She has the home-track edge for sure.

Arnaud Delacour ships in WELL HUMORED (4) for his first appearance in Oldsmar. This one has never lost in a pair of dirt races, although both were on wet tracks. Last season’s champ Centeno will ride.      He and Delacour enjoy a 38% success rate together

Another who makes her premier Tampa attempt is the speedy five-year-old mare TEJANA (6) from the barn of Hall of Famer Shug McGaughey. This daughter of Curlin likes to be the first one out of the gate and could be a threat if loose on the lead. She just missed stealing the Grade 3 Monmouth Oaks back in August.

BLUE COLLAR (5) is a solid closer from the Eddie Kenneally outfit who might benefit form a contested hot pace up front. Antonio Gallardo has the assignment and should have her on the move late.             She won her last start at Churchill at a flat mile. Turning back to seven panels should not be an issue. 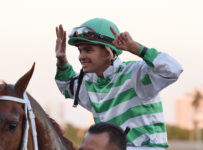