This Saturday kicks off the Tampa Bay Downs stakes program for the 2017-2018 season.

Racing fans can look forward to four stakes events with something old and something new.

Something new is a pair of stakes for Florida-breds that will be contested for the first time.

The City of Ocala and the Marion  County are the first stakes ever at Tampa Bay in the Florida Sire Stakes (FSS) series.

Races in the FSS are restricted to Florida-breds that are sons and daughters of Florida-registered stallions whose  owners  have  nominated them for the  program.The  Florida Thoroughbred Breeders’ and Owners’  Association administers the FSS series and provides the purse money.

The $125,000 City of Ocala is seven furlongs on dirt for 3-year-old fillies and mares. It is the day’s second race.

As for  something old,  there  are the  Sandpiper  and the Inaugural.  Both are fixtures on Cotillion Day, the annual first day of stakes races at  Tampa Bay.

This talented miss loves the Oldsmar track, having registered four of her 5 stakes scores here. She is the 2-1 morning line chalk, lays over this field and appears ready with a trio of local works.

The final one was on Nov. 29, a bullet 5 furlongs in 59.0 breezing from the gate. Antonio Gallardo rides for last season’s top trainer Gerald Bennett.

Having said all that, she is not without competition. STORMY EMBRACE and SURPRISE WEDDING are likely winners if the favorite falter

The former appears to be fine fettle as she equaled her top Brisnet speed figure of  91  on Nov. 11 at Gulfstream Park West (Calder). She finished third that day in the seven furlong Millions Distaff Preview.

Stormy Embrace has had a pair of works over the Tampa track. Wilmer Garcia is up for Kathleen O’Connell.

Surprise Wedding  tries Tampa for the first time and gets back on dirt after racing on grass twice.

She appears to be dangerous on the main track, a performance equal to her last win on that surface (3 races back) could take this. She has no local works. Jesus Rios has the mount for David Fawkes.

This looks like a rematch between THREE RULES and MO CASH. THREE RULES was best by a neck over MO CASH in the  Carry Back Handicap (Grade 3) last July 1 at Gulfstream.

However, he has been away since then, and may need a race. Emisael Jaramillo has the call for Jose Pinchin.

MO CASH, the main rival, returns to the site of his biggest victory, last season’s sophomore stakes. He is 1 for 1 in Tampa and it is his second race back from a lay-off. Ron Spatz saddles, Gallardo rides.

A longshot from the powerful Gerad Bennett outfit is EPIC DRAMA, who has trained well for a come t a 162 day vacation.

His final blow-out was bullet 3 furlongs in 37.1 breezing from the gate.Former leading rider Willie Martinez takes the reins.

In the 39th running of this race, VALUABLE PACKAGE may be a tough customer.

She beat a good field of maidens by 7 lengths at Monmouth, first time out. Next, she faced Grade III foes in Belmont’s Matron stakes, finishing a non-threatening third. She has been rested since mid-October and turned in a local bullet work on Dec,9 – four furlongs in 48.2. Wilmer Garcia will be in the irons for Skip Einhorn.

TONI ANN’S MIRACLE is riding a 3-race winning streak and boasts a 3 for 6 lifetime record.

The Larry Pilotti charge will be tested for class here, but may have an edge.  All her wins were at this three-quarter mile distance. She has never raced or worked in Tampa. Emisael Jarmillo will be aboard.

Graham Motion saddles ALMOND ROCA, a Tlightly raced lass who may have a future. Veteran Pablo Morales has the call, her fourth jockey in many races.

The 33rd running of this race  could be the most competitive stakes of the day.

Here are a trio to consider, any one of which appear to be able to take the priz

*TRICKS to DOO has the best speed figures here and should be a handful for meet-leading jockey Daniel Centeno.

He appears to be training well for Arnaud Delacour. He has worked 5 times since late October, twice in Oldsmar. You have to respect these connections.

Another force to be reckoned with is the (2 for 2) undefeated WILDCAT’S LEGACY trained by Ralph Nicks. This one went on to defeat stakes company at Gulfstream Park West in the $75K Juvenile Sprint after breaking his maiden in his first try. Obviously a colt with ability, he would be no surprise, both wins were by daylight margins. Past riding champ Antonio Gallardo has the assignment.

TWIN FARMS beat a good group of Maidens at Keeneland and earned a good figure doing it, wearing blinkers for the first time. His next race, at a mile was probably too far and he could be an upsetter sprinting once again. Jesus Castenon will be in the saddle for Ben Colebrook. 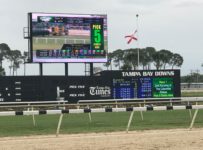 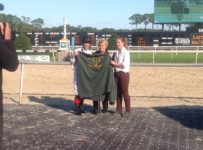 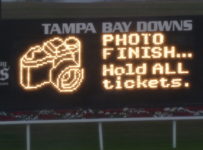