Gulfstream Park has a ten-race card on Wednesday, with  first post of 12:35 p,m,

Gulfstream,  in Hallandale Beach, has live racing on Wednesdays through  Sundays.

Tampa Bay Downs has a nine-race Wednesday card with first post of  12:27 p.m.

The Oldsmar  track has racing on Wednesdays, Fridays and Saturdays/

*Gulfstream will have two  sets of stakes races on Saturday.

It will hold the five stakes races in the annual Clasico  Internacional  del  Caribe.  It is the biggest annual event for thoroughbreds that  race in Caribbean, Central  American and South American nations.

This will  be the first  time the event is being held in  the United States. 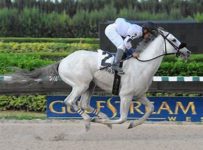