Trained by Todd Pletcher, the son of 2012 Florida Derby (Grade 1) winner Take Charge Indy acted up in the starting gate and had to be reloaded into his outside stall, but he did everything right thereafter.

The WinStar homebred went right to the lead under jockey Tyler Gaffalione, withstood mild pressure from second place finisher Pete Marwick on the backstretch, and drew off impressively to get the seven furlongs in a sharp 1:22.15–with Gaffalione haan-riding him over the final one-sixteenth.

“That’s a nice horse,” Gaffalione said. “He still a little green. He’s still learning. It’s all coming together. Once it does, I think he’s going to be a very talented horse.”

Noble Indy will turn three-years-old  for racing purposes  on Jan.1.One stakes race for which he might be a candidate is the seven-furlong Swale (Grade 2) at  Gulfstream on Feb. 3. His time on Sunday was faster than the winning times in four of the last  nine runnings of the Swale.

On Sunday, he earned an Equibase speed figure of 91–strong for a debut winner 2-year-old.

Saturday and Sunday were the first two  days  of the Gulfstream 2017-2018 championship meet.

The dirt track  was listed as Fast both days, and it played that way while favoring speed.  On Sunday there were six dirt races off seven furlongs or shorter. All of them, including Noble Indy’s race, were won by the horse in the lead after a half mile.

Pletcher has saddled three of the last four winners of the Florida Derby, including Always Dreaming, who went on to capture the Kentucky Derby (G1) last year, and back-to-back winners Constitution and Materiality in 2014, 2015, respectively. Both Constitution and Materiality were debut winners during the Championship Meet at Gulfstream before going on to win the Florida Derby. 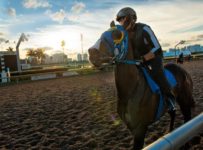