Racing is back on the turf on Friday at the Gulfstream Park West meet, which is run at Calder in Miami Gardens.

Skies were clear at Calder at 10:30 a.m., amid expectations that they will stay  that way.

Thursday was the  34th  day  of the 40-day GP West meet that will end Nov. 26.  On eleven days, meet sponsor Gulffstream Park took most or all of its scheduled-for-turf races off that surface.

LastÂ  year, races were taken off turf on only four days in the 37-day meet.

Five of todays races–are scheduled for turf with the rail at 20 feet.

The Weather Channel forecast is for  just a 15 percent chance of rain during racing hours. 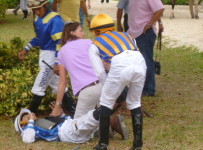