The dirt track is listed as fast and the turf is listed as Firm on Thursday for the eight-race  card at the Gulfstream Park West meet.

Rain has been falling on-and-off at Calder during the morning.

The Weather Channel forecast is for a  50 percent chance of thunderstorms  during racing hours.

The first, third, fifth, seventh and eighth races are scheduled for turf, with the rail at ten feet.

Wednesday was the seventh day of the GPÂ  West meet. And it was the seventh  day without the jackpot payoff requirement of just one ticketÂ  withÂ  the winners of all six Rainbow 6 races.

The jackpot consists of the full carryover plus 80 percent ofÂ  newÂ  bets on the Rainbow 6.

Wagering on the Rainbow 6 was $27,154.  Under the rules for non-jackpot days, Gulfstream took out 20 percent of that amount, divided 56 percent among winning tickets and added 24 percent to the carryover. 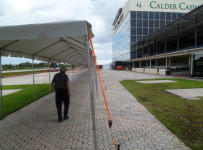