The Gulfstream Park West card for Thursday has eight races, including two allowance/optional claimers that are on turf with horses that are well-known by regular GP West bettors.

First post is 1:15 p.m. for the races, run at  Calder in Miami Gardens and conducted by Gulfstream Park under a lease agreement.

*The dirt track and turf course are both listed as Good.

The first, third, fifth, seventh and eighth races are scheduled for turf with the rail at 5 feet.

According to the Weather Channel forecast, the chance of rain during racing hours is 15 percent.

We will have coverage on our blog, which can be accessed on the menu bar at the top of the home page  of  this Web site. 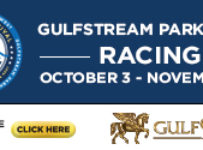