He shot out to an early lead and coasted to a comfortable seven-length victory over Very Very Stella in the $50,000 Coast is Clear Handicap.  It was an appropriate name for the lead that Conquest Big E had in the stretch run.

NOTE–Photo of Conquest Big E on home page is courtesy of Gulfstream Park.

The 4-year-old gelding ran a mile in 1:35.10 under Jilver Chamafi, on the dirt track listed as fast. The win likely earned him a trip to Saratoga Race Course in Saratoga Springs, N.Y., for his next start, said his trainer Donna Green.

Conquest Big E was the even-money favorite in Sunday’s six-horse field.  Very Very Stella (yes, this horse is a gelding) was 12-1.

The win was Conquest Big E’s fourth in 14 career starts.

Conquest Big E was a $700,000 yearling purchase at the 2014 Keeneland September Sale.  He was bought by his current owner Tommy Roberts for $110,000 at the Conquest Stable’s dispersal at the 2016 Keeneland November Sale.

The striking gray son of Tapit finished fourth in the 2016 Holy Bull (Grade 2) at Gulfstream, when he was owned by Conquest Stable and trained by Mark Casse.

The Cost is Clear was Conquest Big E’s third start for trainer Donna Green. He finished fourth April 23 before scoring by 8 ½ lengths on June 7. Both races were at one mile at Gulfstream on a sloppy dirt track. 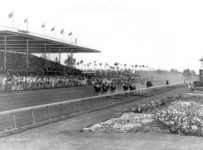