Weather Could Be a Factor on Gulfstream Card

We will have coverage during the afternoon on our blog, which can be accessed on the menu bar at the top of the  home page of this Web site.

As of 10:00 a.m., rain was not falling at Gulfstream. The dirt track and turf course were both listed as good.

The Weather Channel forecast is for a 50 percent chance of showers during racing hours.  Six of the races are scheduled  for  turf.

On Friday, amid steady rain, the dirt track was listed as sloppy and was sealed and the  turf  was listed as good from the third race onward.  Early speed horses held on in most of the races.

As usual at this time of year, the turf course is hard and dry, and could benefit  from rain like that of Friday.

The 20-cent Rainbow 6 is on races seven through twelve.  Scheduled post is 3:38 p.m. for the seventh  race.

*On Sunday, Gulfstream will have eleven races, with  first post of 1:15 p.m.

The Luis Duco-trained 5-year-old mare notched her third win in four starts over wet racetracks, stalking the pace before kicking clear to run seven furlongs in 1:22.79 on a surface that was listed as sloppy and was sealed. Savingtime finished third, another 4 ¾ lengths back in the seven-horse field.

Concealedwithakiss was ridden to her 11th victory in 34 starts by Emisael Jaramillo. 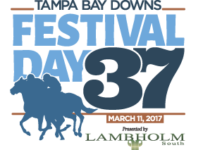