The Princess Rooney, a seven-furlong sprint for fillies and mares, and the Smile Sprint, a six-furlong dash, are designated Breeders’ Cup Win & You’re In” events.

Grade 1 winner Birdatthewire is among the most notable of 26 nominees for the seven-furlong Princess Rooney, in which an automatic fees-paid berth in the $1 million Breeders’ Cup Sprint (G1) at Del Mar Nov. 4 is at stake.

Forum Racing IVâ€’s Birdatthewire, who captured the La Brea (G1) at Santa Anita in December 2015, has excelled at Gulfstream, where she captured the 2015 Gulfstream Park Oaks (G2) and finished third in the 2016 Princess Rooney.

Formerly trained by Dale Romans, the 5-year-old daughter of Summer Bird finished second in her first start for trainer Tom Proctor and her first start of the year in a Presque Isle Downs allowance.

Grade 2 stakes winners Lightstream, who finished third in the Bed O Roses (G3) on the Belmont Stakes undercard, Distinta, who won the Inside Information (G2) at Gulfstream March 18, and Curlina’s Approval, the Royal Delta (G2) winner during the Championship Meet who breezed five-furlongs Tuesday at Gulfstream in 57.74 seconds, are among prominent Princess Rooney nominees.

The nominations list for the six-furlong Smile Sprint is topped by Mind Your Biscuits, who finished second in the Gulfstream Park Sprint (G3) Feb. 25 in between Grade 1 triumphs in the Malibu (G1) and Dubai Golden Shaheen (G1). Owned by J Stables and partners, the 4-year-old son of Posse gave Chad Summers the first victory of his training career in the Golden Shaheen.

Monster Racing Stable’s Delta Bluesman, who captured the 2016 Sprint and Jacks or Better Farms’ Awesome Banner, a multiple graded-stakes winner at Gulfstream Park  are  among the more prominent of the 26 Smile Sprint nominees.

Three Rules, who swept the Florida Sire Stakes Series while inning his first five starts last year at Gulfstream Park, has been nominated to the Carry Back, as well as the Smile, for Shade Tree Thoroughbreds, Tom Fitzgerald and Geoff Roy. Trained by Jose Pinchin, the son of Gone Astray finished second in the Swale (G2), third in the Fountain of Youth (G2) and fifth in the Florida Derby (G1) during the Championship Meet before finishing a troubled third in the Chick Lang Stakes on the Preakness Stakes undercard. 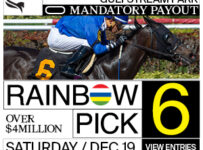