Friday is a mandatory payout day at Gulfstream Park, and as usual the big focus is on the Rainbow 6 where the carryover is $80,790.29.

Conditions are listed as fast and firm and the Weather Channel forecast is for a 15 percent chance of rain during racing hours.

The Rainbow 6 is on races four to nine, with the sequence set to start at 3:58 p.m.  It is a 20 cent only bet–with multiple horses permitted in each race and thus the option of multiple bets on a ticket.

So, as you read this reminder there is still time  for handicapping.

Gulfstream officials expect that $250,000 or more could be bet on the Rainbow 6 on Friday.

Because of the mandatory payout, Gulfstream will pay the Rainbow 6 jackpot regardless of the number of tickets with the winners of all six Rainbow 6 races.

The jackpot is the combination of the full carryover plus 80 percent of the day’s new Rainbow 6 bet (20 percent takeout).

On Friday, Gulfstream also will have mandatory payouts on the Late Pick 5, on races five to nine, and on the Super Hi-5 in the last race. 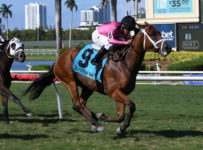