The vans passed through the stable gate at 3:40 p.m. They also carried other horses that will run in stakes at Pimlico on Friday and Saturday.

Kentucky Derby (Grade 1) runner-up Lookin At Lee (photo on home page) was the first to be unloaded from the first van, followed by his stablemate 11th-place Derby finisher Hence.

The pair of Steve-Asmussen-trained colts had flown from Louisville, Ky., along with Doug O’Neill-trained Term of Art, who had boarded a plan in Southern California earlier in the day, and Kenny McPeek-trained Senior Investment, who were unloaded from the second van minutes later.

The third van that originated from Belmont Park in New York waited several minutes before Chad Brown-trained Cloud Computing could be unloaded.

Those horses are among ten that likely will be entered when the Preakness post position draw is held at 5:00 pm. Wednesday.  The race will be run on Saturday, with scheduled post of 6:45 p.m. 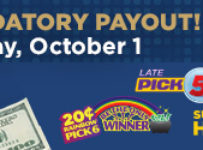 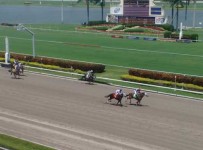