Out handicapper Bob Bauer’s picks for today’s Tampa Bay Downs card may be found in our Handicapping section—on the menu bar at the top of this  Web site’s home page.

Bob is a former  racing writer  for  the St. Petersurg Times and a former publicity director at Tampa  Bay Downs,

The first 3 runners mentioned below have given a good account of themselves when racing over wet tracks.

#8 HENCE- Many times the Derby is won by the “now” horse, the one that is reaching his peak at the right time. Hence may just be that one this year. He was an upset victor at 10-1 in the G III Sunland Derby in what appears to be a breakthrough performance. Breaking next-to-last in the field of 11, he made steady progress in the backstretch passing rivals one by one, making up 11 lengths by the top of the lane. He was best by a handy 3¾ length margin, getting the 9 furlongs in 1:48 flat.  His running style suggests he might like the additional furlong in the Derby. Hence logged 4 good works at Churchill (41 days since last race) and has won before in the slop, also earned the best recent speed figure.

#14 CLASSIC EMPIRE- Morning-line favorite has the goods to live up to his reputation. His record of 5 wins in 7 tries with earnings in excess of $2M shows that he is no flash-in the-pan type. He had a 4 for 5 two-year-old campaign, topped off by double Grade I success in the Breeder’ s Cup Futurity and Breeder’s Cup Juvenile.  The sophomore’s next start on Feb. 4 in the Grade II Holy Bull was dull, caused by a foot ailment. He was freshened again and had some footware adjustments in preparation for the Grade I Arkansas Derby where he showed up looking like himself and scored his third Grade I win after being steadied early. Appears to be back in form. Is 2 for 2 at Churchill, with one of the wins coming on a wet track.

#10 GUNNEVERA- Ran the best race of his life when winning the Grade II Fountain of Youth on March 4. He had no chance when taken back, after breaking from the widest post in Grade 1 Florida Derby in his next outing. This one is a stout closer who owns some decent late pace figures. Throw out his last race and expect him to be in the fight down the stretch.

#5 ALWAYS DREAMING- Is in stellar form now for Pletcher and Johnny V., being undefeated (3 for 3) in his three-year-old season. His last victory in the Grade I Florida Derby gave notice that he can run with the big colts, earning a lifetime best fig. Bullet work 4/28, 5 furlongs 59.3 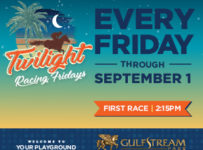 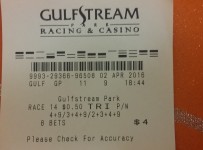