The bet requires picking the first five finishers in correct order with no consolation payoffs such as having the first four places.

There were  no winning Super High 5 tickets in any of the last three races on Sunday, the most recent race day at Tampa Bay.  Thus, there is an overnight carryover.

Bettors have had three days to handicap the first race with its carryover.  Precedents at Tampa Bay and other tracks indicate that more than $20,000 could be added on the Super High 5 in the first race.

It is $1 minimum bet with an 18 percent takeout. Tampa Bay offers it on all races with seven or more starters.

Conditions are listed as fast and firm.  We will have coverage during the afternoon on our blog, which can be accessed on the menu bar at the top of this Web site. 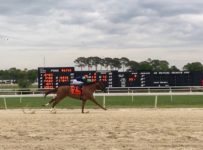