Florida’s Sunday  racing will get underway at 12:55 p.m. with a nine-race card at Tampa  Bay Downs.

Gulfstream  Park has a ten-race Sunday card with first post of 1:15 p.m.

Conditions are listed as fast and firm at both tracks.

Gulfstream’s Sunday feature is the Jeblar Stakes, at seven furlongs on dirt for3-year-olds and  up.

The Jeblar is the ninth race, with scheduled post of 5:34 p.m. We will have a preview of that race early this afternoon on our blog, which can be accessed on the menu bar at the top of the home page of this Web site.

Tampa Bay Downs
Daniel Centeno is listed on mounts in seven races, as he seeks to wrap up what would be his sixth jockeys’ title at Tampa Bay.

Centeno rode four winners on Saturday, giving him 100 for the 2016-2017 meet as it heads into its final five race days.

Edwin Gonzalez is a distant second in the jockey standings with 80 wins. 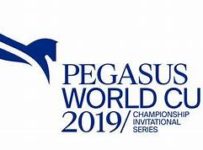