Following heavy overnight rain, Gulfstream Park will not have turf racing on Sunday.

Gulfstream has moved its three scheduled-for-turf races to the dirt track, which is listed as sloppy. Those are the first, fifth and tenth races.

NOTE: At Tampa Bay Downs, conditions are fast and firm for a nine-race card that has first post of 12:45 p.m.

At 10:00 a.m., it was not raining a Gulfstream in Hallandale Beach, Fla. The Weather Channel forecast is for at least a 35 percent chance of rain during racing hours.

HorseRacingFLA’s  review of Equibase charts shows that Gulfstream had gone 41 racing days without moving any races from the turf.  That had last happened on Feb. 22.

Betting attractions include three allowance/optional claiming races with purses of  $37,000 or more.  Those are the third, eighth and ninth races—all originally scheduled for dirt.

We will have coverage  during the afternoon on our blog, which can be accessed via the menu bar at the top of the home page of this Web site. 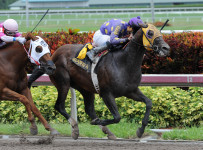