Florida racing regulators have suspended trainer Jamie Ness for 100 days and fined him $4,800 in a settlement regarding a series of twelve medication violations.

Ness agreed to those penalties in a consent order issued Feb. 24 by the Florida Division of Pari-Mutuel Wagering, and he has begun serving his suspension.

He has led or tied in trainer wins at nine Tampa Bay Downs meets. He is  second, behind Gerald Bennett, in wins at the 2016-2017 championship meet.

The Florida DPMW disciplined Ness for twelve post-race test positives for the drug Clenbuterol in horses he trained at Florida tracks.

Clenbuterol is effective in treating respiratory problems. It also has the potential to improve a horse’s performance through its anabolic effects when abused. It is not permitted in a horse’s  system on race days.

The Florid Horsemen’s  Benevolent and Protective Association is among industry groups that have determined that it usually takes 14 days for Clenbuterol to withdraw from a horse’s system.

Bloodhorse reported that the 12 races in question were between December 2012 and March 2014. Ten were at Tampa Bay Downs and two were at Gulfstream Park.

Under racing regulators’ reciprocity system, Ness will not be allowed to train in most other states while he is under the Florida-imposed penalty.

Florida is among states that allow a suspended trainer  to move horses to a family member. Ness’s wife Mandy is training many of the horses at Tampa Bay Downs that had been under her husband’s care.

On Friday, she has four horses entered at Tampa Bay—all previously trained by her husband.

The Nesses own Jagger Inc., which led Tampa Bay in trainer wins in 2015-2016 and is in first place for the current meet. Jagger is not included in the suspension of Jamie Ness.

Through Wednesday, Gerald Bennett leads Tampa Bay trainers with 31 wins and Jamie Ness is second with 22.  Mandy Ness has one training victory.

Also through Wednesday, Jagger has 15 wins.  Ridenjac Racing is second with nine wins. 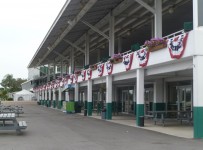