By Jim Freer and Bob Bauer

Saturday was a multiple record-setting day at Tampa Bay Downs, and another huge day at that track for trainer Todd Pletcher.

Of greatest significance on the Oldsmar track’s annual Festival Day was the emergence of the Pletcher-trained Tapwrit (photo on home page) as a top contender for this year’s Kentucky Derby (Grade 1).

That was the second highest in Tampa Bay Downs history. The record of $12,250,447 was set on March 12, 2016—that year’s Festival Day. Both days had twelve races, including five stakes.

“We’re extremely pleased and proud to see our biggest day receive such tremendous support from the Tampa Bay community,” said track Vice President-General Manager Peter Berube. “We wish all the participants the best of fortune going forward, and naturally we’re hopeful Tapwrit will move on to compete in the Kentucky Derby.”

With John Velazquez riding, Stanford broke the record of 1:42.45 that McCraken set this past Feb. 11 in winning the Sam F. Davis (Grade 3) for 3-year-olds.

Tapwrit finished second by 1 1/2 lengths to McCraken in The Sam F. Davis. McCraken did not run in the Tampa Bay Derby because of a left front ankle strain that his trainer Ian Wilkes described as “very minor.”

Wilkes hopes to have McCraken ready for the 1 1/8 mile Blue Grass (Grade 2) on April 8 at Keeneland in Lexington, Ky.

Stanford, the 1-2 favorite, led gate-to-wire and beat Amy’s Flatter by 3 ¼ lengths in the  Challenger.

Three races later, Tapwrit broke the stakes record for the Tampa Bay Derby and moved himself higher on the list of contenders for the Kentucky Derby.  That  1 ¼ mile race will be on May 6 at Churchill Downs in Louisville, Ky.

Tapwrit, the even-money favorite, was in seventh place after a half mile. He then began splitting horses, took command around the turn and powered to his victory.

The win gave the son of Tapit 50 qualifying points for the Kentucky Derby.

Tapwrit has 54 qualifying points and is virtually assured of a spot in the 20-horse Kentucky Derby field.

The win was Pletcher’s fifth in the Tampa Bay Derby, and fourth in the last five years in that race.

Tampa  Bay’s dirt track was listed as fast, and it should be noted that several other winning dirt track times were very fast.

But those who watched the races of Tapwrit and of Stanford would have to  rate their performances, as exceptional, regardless of any speed bias.

On Sunday, we will report on the Equibase speed figures earned by Tapwrit and Stanford. We also will look at the results of the Tampa Bay Derby in the wider context of how the field is shaping up for the Kentucky Derby.

Last year, 32 points was the cutoff for making the 20-horse Kentucky Derby field.

The Blue Grass is among stakes races in April that will  have 100, 40, 20 and ten points for the first three finishers. 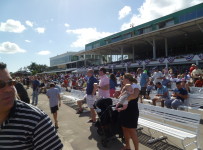