Unless otherwise noted, first post time at Gulfstream will be 12:35 p.m. for the remainder of the championship meet’s Wednesday through Sunday schedule. An exception will be a 12:00 p.m. first post on Saturday April 1, when the $1 million Florida Derby (Grade 1) will be one of nine stakes races on the card.

On Wednesday, the Rainbow 6 carryover will be $865,950.  It will be on races five through ten, with the sequence scheduled to begin at 2:32 p.m. The carryover has been growing because Sunday was the 18th straight race day without the jackpot payoff requirement of just one ticket with the winners of all six Rainbow 6 races. The jackpot is the full carryover plus 80 percent of the day’s new Rainbow 6 bets.

Entries will be out on Wednesday afternoon.

It also was  the first U.S. stakes win for trainer Victor Barboza Jr., who said he won 28 stakes in his native Venezuela.

Distinta won in 1:23.93 on the track listed as fast.  It was the second-slowest winning time in the last 20 runnings of the Inside Information.

Winning Times in most of the other dirt races also were relatively slow at Gulfstream on Saturday. Distinta received an Equibase speed figure of 99, which is modest for a graded stakes.

Both horses passed Dearest, the 3-1 second choice, in the final  strides.

Curlin’s Approval, the 3-5 favorite, never challenged for the lead and finished fifth.  In her two previous races, both at Gulfstream, she won the 1 1/16 mile Royal Delta (Grade 2) and the seven-furlong Herecomesthebride (Grade 3). 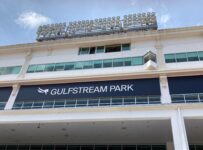