The Hallandale Beach, Fla.,   track will have thirteen races, with first post of 12:35 p.m.

The Rainbow 6 will be on races eight through thirteen, with the sequence set to start at 4:02 p.m.

Gulfstream is guaranteeing that the pool on the Rainbow 6 will be at least $1.5 million.  It is a 20-cent only bet.

The Rainbow 6 carryover has been growing because Friday was the 21th  straight race day without the jackpot payoff requirement of just one ticket with the winners of all  six Rainbow 6 races. The jackpot is the full carryover plus 80 percent of the day’s new Rainbow 6 bets.

Barring scratches, there will be a maximum 55 starters in the Rainbow 6 races.  Going ALL in every race would cost $96,768.

Tracks often will leave a stakes race with a small field out a Pick 6 bet—with the goal of avoiding a case where many bettors will single a horse, thus cutting down on possible handle.

But Gulfstream has scheduled the $100,000 Skip Away (Grade 3) as the 12th race even though it has just six entrants.

Many bettors will no doubt  single the Todd Pletcher-trained Zulu, whose record includes a second place finish in last year’s 1 1/16 mile Fountain of Youth at Gulfstream. Jose Ortiz has the mount.

Fear the Cowboy comes into the Skip Away after finishing second on Feb. 25 in the Maxaam Gold Cup at 1 1/8 miles on dirt at Sam Houston Race Course in Houston.

Past performances indicate that Flashy Jewell likely will attempt to wire the field.  Joe Bravo will ride for trainer Eddie Kenneally.

The Saturday card also has the $75,000 Any Limit at six furlongs on dirt for three-year-old fillies.  It is the eleventh race, with Cursor and Who’s the Lady as likely favorites in the seven-horse field.

Cursor will make her first start since last Nov. 5, when she finished fourth in the one mile Tempted (Grade 3) at Aqueduct.  Ortiz will ride for trainer Mark Hening.

Who’s the Lady, unbeaten in three starts, will make her stakes debut for trainer Kathleen O’Connell.  Lopez has the mount.

Two of Saturday’s Rainbow 6 races are maiden special weights, and two  are maiden claiming races,  Three of the races are scheduled for turf.

The Weather Channel forecast is for a chance of rain ranging between 10 percent and 35 percent during racing hours.

That was based on this non-jackpot day rule: After a 20 percent takeout, Gulfstream divides 56 percent of the day’s Rainbow 6 bet among tickets with the most winners (in Friday’s case six) and adds 24 percent to the carryover.

A HorseRacingFLA  review of Equibase charts shows that Friday’s Rainbow 6 wagering was the highest on a weekday for Gulfstream’s 2016-2017 championship meet.

Gulfstream has scheduled a mandatory payout of the Rainbow 6 for Sunday April 2, closing day of that meet.

It will pay out the full carryover and 80 percent of the day’s new Rainbow 6 bet, even if there are multiple tickets with all six winners.

A state law prohibits a pari-mutuel from continuing a carryover into a succeeding race meet.  Gulfstream will open its spring meet on April 2.

If the carryover is not taken down by April 2, it could be $2 million or higher that day. In that situation, Rainbow 6 history indicates that $4 million or more could be bet on it on April  2.

Until then, some syndicates and teams with large numbers of bettors will be preparing tickets of perhaps $100,000 or more with a goal of taking down the jackpot before April 2

No matter the size of a carryover, betting on the Rainbow 6 likely will be $400,000 or more on Saturday April 1 when Gulfstream will have the Florida Derby (Grade 1) and eight other stakes races. 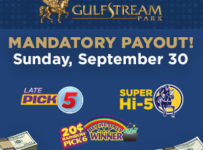