To borrow a phrase from President Donald Trump, this Saturday “could be a huge day at Gulfstream Park— HUUGE.”

The $400,000 Fountain of Youth is one of the day’s nine stakes races at the Hallandale Beach, Fla., track. The stakes (listed below) have total purses of $1.5 million.

There are guaranteed pools totaling $1.3 million on the Rainbow 6, Late Pick 5 and Late Pick 4.

We will be at Gulfstream on Saturday afternoon and will have coverage on our blog. It can be accessed on the menu bar at the top of this Web site.

The Weather Channel forecast is for a zero percent chance of rain and temperatures in the low 70s during racing hours. Winds will be out of the northeast at 20 miles per hour—at the horses’ backs as they come down the stretch.

The Fountain of Youth, at 1 1/16 miles on dirt, is a “Road to the Kentucky Derby” points race.  The winner will get 50 points, virtually assuring a  spot in the Kentucky Derby (Grade 1) on  May 6 at Churchill Downs in Louisville, Ky.

The second through fourth finishers in the Fountain of Youth will earn 20, 10 and five Derby points respectively.

Irish War Cry was on an unchallenged lead throughout the Holy Bull and won by 3 ¾ lengths in the solid time of 1:42.52.

Joel Rosario retains the mount on Irish War Cry, who has won all three of his career starts. Irish War Cry is a son of Curlin.

Gunnevera, second in the Holy Bull, also is back for the Fountain of Youth. He is the 7-2 third choice in the morning line set by Jay Stone.

Gunnevera has the same late-running style as his sire Dialed In, winner of the 2011 Florida Derby (Grade 1) at Gulfstream.

Thus, his chances could be better in the 1 1/8 mile Florida Derby on April 1.

But Gunnevera is a win candidate in the Fountain, particularly if several horses test Irish War Cry early and there is a pace meltdown.

Javier Castellano is back on Gunnevera for trainer Antonio Sano.

The Fountain field also has Practical Joke, making his first since last Nov. 5 when he finished third in the 1 1/16 mile Breeders’ Cup Juvenile (Grade 1) at Santa Anita in Arcadia, Calif.

Earlier in 2016, Practical Joke won the seven furlong Hopeful (Grade 1) at Saratoga in Saratoga Springs, N.Y., and won the one mile Champagne (Grade 1) at Belmont Park in Elmont, N.Y.

Practical Joke, a son of Into Mischief, likely will race in mid-pack in the race’s early stages

He comes into the Fountain off a series of fast workouts at the Palm Meadows training center in Boynton Beach.

Three Rules is a solid exacta-trifecta threat in the Fountain, partly because of his “horse for the course” record at Gulfstream.

On Feb. 4 at Gulfstream, Three Rules finished second by three-quarters of a length to Favorable Outcome in the seven-furlong Swale (Grade 2).

The Fountain will be the first dirt track race for Made You Look, trained by Todd Pletcher.  His record includes a win in the 7 ½ furlong Dania Beach (Grade 3) on turf at Gulfstream on Jan. 7.

Castellano has ridden Made You Look in all six of his previous races.  With Castellano staying on Irish War Cry, Pletcher has turned to his other go-to jockey John Velazquez to ride Made You Look who is a stretch runner.

Irish War Cry is in post eight.  Horses (with posts) likely to contest him for the lead are Beasley (post 6) who is making his stakes debut, Three Rules (post 7) and Takaful (post 10) who is 12-1 in the morning line.

Last year, 32 points was the cutoff for the 20-horse Kentucky Derby field.

If pools (including the Rainbow 6 carryover) do not meet the guaranteed levels, Gulfstream will put in money to make up the difference.

Here are the stakes races, with scheduled post times:

The combination of that lineup and the guarantees virtually assure that Gulfstream will continue this season’s trend of exceptionally strong handle on Saturdays.

Last year, Gulfstream ran the Fountain of Youth and six other stakes on a 13-race card on Saturday Feb. 27.

With clear skies forecast for Saturday. So, look for a new Fountain of Youth handle record.

Yes, folks, it should be a  huge day. 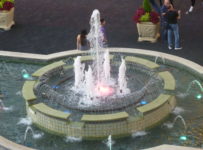