The Gulfstream Park crowd was already cheering loudly when Gunnevera took the lead entering the stretch in Saturday’s Fountain of Youth Stakes.

The sound became a roar, in both English and Spanish, as Gunnevera pulled away toward the finish line and victory in the Grade 2 stakes. It is a major prep for the Florida Derby (Grade 1) and the Kentucky Derby (Grade 1).

What followed as twilight turned to dusk was one of the most exuberant winner’s circle celebrations that we have seen over the past two decades at Gulfstream.

(Note: The photo that is below and also on the home page for this article is of co-owner Solomon Del-Valle leading Gunnevera into the winner’s circle after the Fountain of Youth.) 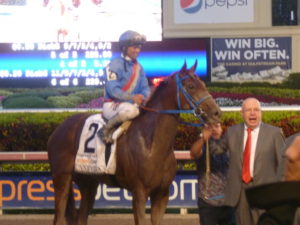 The excitement was about a South Florida-stabled horse who is on a roll toward the Kentucky Derby, and whose human connections are among the dozens of horsemen who this decade have moved to Florida to escape the political and economic turmoil in Venezuela. Antonio Sano, Gunnevera’s trainer, is among the most prominent members of that group. 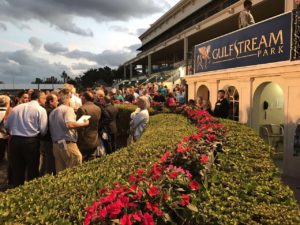 Reporters with trainer Antonio Sano after 2017 Fountain of Youth

After the Fountain of Youth, about 50 friends and family members of the Gunnevera team were part of the crowd that milled into the Gulfstream winner’s circle and the area just outside it. They were joined by almost as many Gulfstream officials and media members.

Minutes earlier, they watched as Gunnevera beat Practical Joke by a growing 5 ¾ lengths.

Gunnevera covered 1 1/16 miles in an unpressured 1:44.25 on the dirt track listed as fast, and continued with a strong gallop-out.

With Javier Castellano riding, Gunnevera moved up from tenth and last place after a quarter mile. In addition to Practical Joke, he blew past Three Rules and the even-money favorite Irish War Cry, who battled for the early lead and finished third and seventh respectively.

Practical Joke was the 3-1 second betting choice, and Gunnevera was third at 4-1. 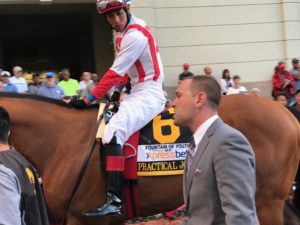 The mob scene for Gunnevera came at the end of a day when all-sources handle was $26,693,007.  That was a record for Fountain of Youth day. The Fountain of Youth was one of thirteen races, nine of them stakes, at Gulfstream on Saturday.

The previous Fountain day record was $24,113,490 on Saturday Feb. 27, 2016. There were 13 races, including the Fountain of Youth and six other stakes races. The weather was clear with no rain, similar to this past Saturday. 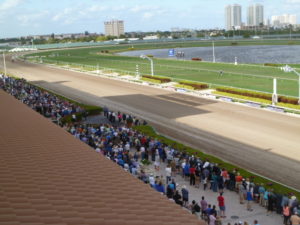 Scheduled post on Saturday for the Fountain of Youth was 6:05 p.m. Gulfstream is well known for dragging out post parades to bring in more wagering.  That happened before several races.

So, it was not a big surprise that the horses did not leave the gate for the Fountain until 6:22 p.m.—with the lights on as necessary.

Sano led Venezuelan trainers in wins seven times before he moved to Florida in 2010.  Since then, his success has included leading in wins at last year’s Gulfstream Spring Meet, Gulfstream Summer Meet and Gulfstream Park West (Calder) Meet. 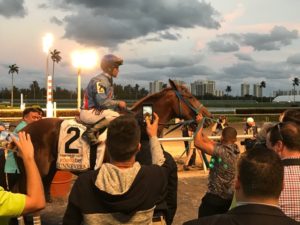 Gunnevera after the 2017 Fountain of Youth

Gunnevera is owned by Peacock Racing Stables. Solomon Del-Valle, a Venezuelan businessman, was the only one of Peacock Racing’s three principals who were at Gulfstream on Saturday.

The other Peacock owners are Guillermo Guerra from Venezuela and Jaime Diaz from Spain.

Gunnevera is named after a city in Spain.

Castellano also is native of Venezuela and is a four-time Eclipse Award winner.

He rode Gunnevera in two of his other three wins. He also was on board that late-running colt when he finished second by 3 ¾ lengths to a loose-on-the-lead Irish War Cry in the 1 1/16 mile Holy Bull (Grade 2) at Gulfstream on Feb. 4.

Not surprisingly, Sano plans to keep Castellano on Gunnevera for the $1 million Florida Derby at 11/8 miles at Gulfstream on April 1 and in the $2 million Kentucky Derby at 1 ¼ miles at Churchill Downs in Louisville, Ky., on May 6.

“Castellano has never won the Kentucky Derby,” Sano said. “For me it is the first time. This is the year.”

Gunnevera earned 50 Kentucky Derby qualifying points by winning the Fountain of Youth. He has 64 points. Last year, 32 points was the cutoff for getting into the 20-horse Kentucky Derby field.

Gunnevera’s sire is Dialed In, who also was a closer and won the Holy Bull and Florida Derby in 2011. 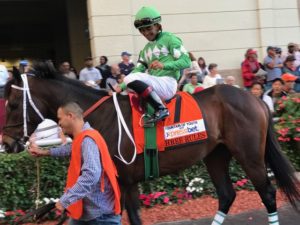 That purchase was at the Keeneland Sale of yearlings in September 2015.

In an upcoming article, we will have more about the bargain buy who was later named Gunnevera and his prospects for the remainder of 2017.