Clear skies are forecast for today at Tampa Bay Downs, on the biggest day of its meet, and for Gulfstream Park, which has two turf sprint stakes.

Gulfstream has a 13-race card with first post of 12:00 p.m. The attractions include large guaranteed pools on three late multi-race bets.

The Weather Channel forecast is for zero percent chance of rain at Tampa Bay Downs in Oldsmar and at Gulfstream in Hallandale Beach.

We will have previews and other coverage during the afternoon on our blog. It can be accessed on the menu bar at the top of the home page of this Web site.

Here is the Tampa Bay stakes schedule, in the order they will be run:

The co-features are five furlongs on turf with $75,000 purses.

The Captiva Island is for fillies and mares 4-years-old and up.  It is the fourth race with scheduled post of 1:35 p.m.

If any of the pools do not reach the guarantee levels, Gulfstream will make up the difference.

The Rainbow 6 carryover has grown because Friday was the 11th straight day without the jackpot payoff (full carryover plus 80 percent of the day’s Rainbow 6 bet) requirement of just one ticket with the winners of all six races.

A total of $170,453 was bet on the Rainbow 6.  Of that, Gulfstream took out 20 percent. It divided 56 percent among tickets with six winners and added 24 percent to the carryover. 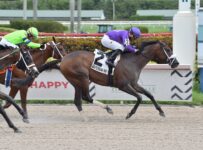