For Thursday, racing is back on the turf at Gulfstream Park but remains off the turf at Tampa Bay Downs.

We will have updates during the afternoon on our blog, which can be accessed on the menu bar at the top of this Web site.

At Gulfstream, the dirt track and  turf course are both listed as good. The second, sixth, seventh, ninth and tenth races are scheduled for turf.

The Weather Channel forecast is for  a  zero percent chance of rain during racing hours in Hallandale Beach, where Gulfstream is located

Because of rain in the morning and during racing hours, Gulfstream moved all four of Wednesday’s scheduled for turf races to the dirt track that was listed as sloppy and  was sealed.

It was just the second day that gulfstream has taken any races off the turf in 38 racing days  this year.

At Tampa Bay, the dirt track is listed as good.  The fifth, seventh and ninth races have been moved to the dirt.

On Wednesday, morning rain led Tampa Bay to  take two of its three scheduled  for turf races off that surface. There was intermittent rain in the Tampa Bay area later in the day.

Today’s Weather  Channel forecast is for just a five percent chance of rain during racing hours in Oldsmar where Tampa Bay Downs is located. 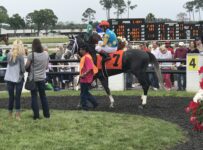