Tampa Bay Downs will resume racing on Wednesday with a nine-race card and first post of 12:25 p.m.

It will be the 54th day of the 91-day meet at the Oldsmar track.

Here are the meet leaders through Sunday:

Daniel Centeno leads with 58 wins. Ronald Allen Jr. is second with 47 victories, followed by Pablo Morales with 46 and Edwin Gonzalez with 42.

Antonio Gallardo led Tampa Bay in wins each of the last three meets. He is not riding at the Oldsmar track this season.

Gallardo began the winter at Gulfstream Park and rode nine winners in 68 mounts at that track’s championship meet.  He is now riding in the Aqueduct winter meet and has 16 wins in 142 starts.

Nine-time champion Jamie Ness is second with 22 wins, followed by Kathleen O’Connell with 20.

Jagger Inc., owned by Ness and his wife Mandy, leads  with 15 wins.

Ridenjac Racing, owned by Ward, is second with nine wins. Bruno Schickendanz has eight wins and is in third place.

Tampa Bay Downs has racing on Wednesdays, Fridays, Saturdays and Sundays through May 7.

Please check our Web site each morning for first post times and other news about the day’s races. 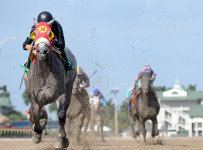