Bettors wagered a whopping $734,771 on the Super Hi-5 in the first race at Gulfstream Park on Wednesday.

Horses at 6-1 or lower odds came in first through fifth in the nine-horse field. Sir Hannoun, at 4-1, won the 6 1/2 furlong dirt race by 3 ¼ lengths over the 6-5 favorite Money Market.

That resulted in an undetermined number of multiple winning tickets.

The attraction to bettors was an overnight carryover of $112,178.

While official data are not available, it is believed that the race’s betting on the Super Hi-5 was among the largest in Gulfstream history.

Our suggested $1 part wheel bet, totaling $24, was not a winner.

We included the horses that wound up second, third and fourth in those slots. But we had the winner Sir Hannoun only in the fourth and fifth slots, and put Khamsa Tfu who finished fifth in the first and second slots. 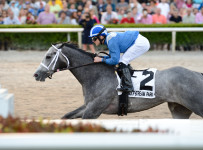