Unified provided the highlight for Gulfstream Park’s weekend as he took an early lead and held off Mind Your Biscuits to win by a neck in Saturday’s $100,000 Gulfstream Park Sprint (Grade 3).

(Note – photo on home page, courtesy of Gulfstream, shows Unified on the inside and Mind Your Biscuits on the outside)

Unified was the 2-1 second choice and Mind Your Biscuits was the 4-5 favorite in the six-horse field.

Gulfstream had two other stakes races on Saturday.

Morticia won the Melody of Colors at five furlongs on turf for 3-year-old fillies.

On Sunday evening, we will have a detailed report on the three stakes and other Saturday-Sunday racing at Gulfstream.

The dirt track is listed as fast and the turf is listed as firm.  The Weather Channel forecast is for a 15 percent chance of rain during racing hours.

On Sunday’s first race, there is a carryover of $3,278.17 on the Super Hi-5.  The bet is $1 minimum and requires picking the first five finishers in correct order, with no consolation payoffs. 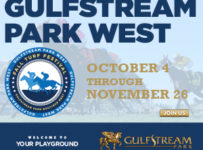