The Wednesday feature at Tampa Bay Downs is a one-mile turf race for two-year-old fillies, with the prominent Graham Motion and Christophe Clement among the trainers.

It is the eighth race with scheduled post of 3:48 p.m.

Four of the eight remaining races are scheduled for turf.

The dirt track is listed as fast and the turf is listed as firm. The Weather Channel forecast is for a zero percent chance of rain.

Motion will send out Full of Zip and Clement will send out Sea Harmony. Each won her career debut, rallying from back in the pack, and will be making her second start.

They likely will be chasing Rockin, trained by Keith Nations and to be ridden by Pablo Morales. On Nov.28 at Laurel Park in Maryland, Rockin led gate to wire and won at 5 ½ furlongs on turf.

Sea Harmony won at one mile on the turf at the Meadowlands in New Jersey on Oct. 5.  Anthony Crastus has the mount today.

After a slow start, Full of Zip was in ninth place by 15 lengths after a half mile. She rallied to win by 1 ½ lengths.  She was ridden by Trevor McCarthy, who remains riding in Maryland.

For Wednesday, Motion has given the  mount to Angel Cruz.

Last Saturday Cruz rode the Motion-trained Conscription to a win in the feature race at 1 1/16 miles on turf for three-year-old fillies.

Pin Oak Stud in Kentucky is the owner and breeder of Full of Zip and of Conscription.

None of the three horses listed above are in for the $75,000 optional tag. 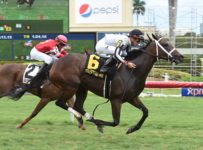