Both Florida thoroughbred tracks will resume live racing on Wednesday.

Gulfstream Park has a ten-race card with first post of 12:35 p.m.

The dirt track is listed as fast and the turf is listed as firm. Five races are scheduled for turf.  The Weather Channel forecast is that the chance of rain will increase from 15 percent to 40 percent during racing hours.

Three races are scheduled for turf. The Weather Channel forecast is for a zero percent chance of rain during racing hours.

We will have coverage on our blog.

Even though it is not a stellar card, there ae 118 entries including nine also eligibles.

There is a carryover of $2,560.28 on the Super Hi-5 in the first race. It is a $1 minimum bet and requires picking the first five finishers in correct order, with no consolation payouts.

On Wednesday afternoon, Gulfstream will announce entries for Saturday Dec. 10 when it will have a Juvenile Showcase with all races for two-year-olds.

Six of those races are stakes, all with $75,000 purses. Gulfstream anticipates that trainers will use them as preps for Jan. 7, when it will have six stakes races with richer purses for newly turned three-year-olds.

*A highlight of Tampa Bay’s Wednesday card  is the fifth race, with scheduled post of 2:21 p.m.

There are seven entrants, and only Bill’s Passion is not in for the high tag.  The winner’s share of the purse is $16,500. It would take six wins at this level, to make up the claiming price. Thus, it would be a surprise if any  of the horses are claimed.

Bill’s Passion is a likely favorite, partly because he is trained by Gerald Bennett.  After leading Tampa Bay trainers in wins last season, Bennett is first again this season with six wins in the meet’s first five race days.

We will have a preview of the race on our blog. 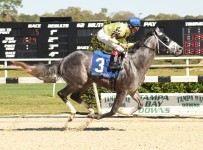