Gulfstream reported that the winning ticket had one horse singled in each of the first five legs and all 12 runners in the sixth leg (tenth and final race).  That was twelve bets of 20 cents each.

Gulfstream did not identify the individual or group that bought the ticket. But it said the ticket was purchased through TVG, which offers advance deposit wagering.

Gulfstream will begin a new Rainbow 6 pool on Friday.  There is a ten-race card with first post of 12:35 p.m.  The Rainbow 6 is on races five through ten.

The winning ticket took down the Rainbow because 42-1 shot Maria and Beto won the tenth and final race.

Going into that race it was the only live ticket that included Maria and Beto.

Gulfstream pays out the full Rainbow 6 jackpot (all of the carryover plus 80 percent of the day’s Rainbow 6 bet) only on days when there is just one ticket with the winners of all six Rainbow 6 races.

On other days, Gulfstream takes out 20 percent of the day’s Rainbow 6 bets and then divides 56 percent among tickets with the most winning horses and adds 24 percent to the carryover. 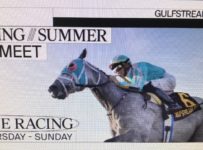