Tampa Bay Downs will open its 2016-2017 thoroughbred racing season on Saturday Nov. 26 amid anticipation that it will be one of the most exciting in the track’s 91-year history.

The Oldsmar track, as always, will have a very competitive roster of jockeys and trainers. In addition, Tampa Bay Downs will have its richest-ever stakes schedule and will welcome several new sponsors for stakes races.

The regular portion of the meet will have 89 race days and extend through May 7.

But as of this writing it appears likely that Gallardo will ride in New York this winter rather than returning to Oldsmar.

Through Sunday he is tied for second in wins, with 12, in the meet that began Nov. 1 at Aqueduct in Ozone Park, N.Y.

Among the top jockeys returning to Tampa Bay Downs is Daniel Centeno, who finished second in 2015-2016 with 98 wins.  He has led Tampa Bay jockeys in wins five times.

Many well-known successful trainers are returning to Tampa Bay Downs. such as Gerald Bennett, Kathleen O’Connell and Jamie Ness.

They are no strangers to TBD, and have consistently been leaders in wins, winning percentages and earnings.

Horses change every year.  But with their experience, the top returning jockeys and trainers have track records that fans can use in making betting decisions early in the meet.

Bennett last season ranked number one with 51 wins, $831,232 in earnings and a 22 percent win percentage.  He plans to have 46 horses at Tampa Bay Downs this meet, similar to recent years, and 24 of them will turn 3 years this coming January 1.

O’Connell returns after finishing third last season in wins with 38 and second in earnings with $598,500. As usual at Tampa Bay, she plans to have about 50 horses.

Ness was second in wins with 39 and third in total earnings with $583,167 last season. He has led or tied Tampa Bay Downs trainers in wins nine times.

The legendary Todd Pletcher will again be among trainers who race primarily at Gulfstream Park in Hallandale Beach during the winter while also vanning horses across the state to race in Tampa Bay Downs stakes races.

Pletcher was fourth last season in Tampa Bay Downs earnings at $543,550. He had nine wins in 18 starts at Oldsmar.

His most prominent winner was Destin in Tampa Bay Downs’s two biggest races for three-year-olds. Those races are the Sam F. Davis (Grade 3) and the Tampa Bay Derby (Grade 2).

Tampa Bay Downs will have 24 stakes races with total purses of almost $3 million.

The stakes schedule begins Saturday, Dec. 3 with the Inaugural Stakes for 2-year-old males and the Sandpiper for 2-year-old fillies. Both are six furlongs on dirt with $100,000 purses.

The biggest stakes day of the meet will be Festival Day, with the $350,000 Tampa Bay Derby and four other stakes races.

The EG Vodka Turf Classic and the 14 Hands Winery Sophomore Turf are two of the six races for Florida-bred horses scheduled for that day.   The other Florida Cup Day stakes are the Hilton Garden Inn/Hampton Inn & Suites Sprint; the Ocala Breeders’ Sales Sophomore; the Stonehedge Farm South Sophomore Fillies; and the Pleasant Acres Stallions Distaff Turf.

The purse money for each of the Florida Cup races was increased to $100,000 from $75,000 prior to the two recent sponsorships being finalized.

Nov. 26 is quickly approaching and race fans are curious to see which horses, jockeys and trainers will rise to the top early.

We look forward to seeing you at the track on opening day and throughout the season.

Meanwhile, please follow us on this Website and on our blog, insidefloridahorseracing.blogspot.com  as we provide continuing coverage this season at Tampa Bay Downs. 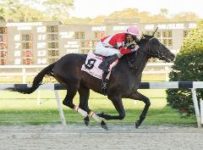