The Florida Department of Agriculture and Consumer Services (Florida DOACS) has lifted its quarantine of a Gulfstream Park barn that had been the stable for a horse that died Nov. 6 from the highly contagious Equine Herpes Virus (EVH-1).

The Florida DOACS and Gulfstream removed a series of restrictions late Monday after the regulatory agency completed tests and found that no other horses had that virus at Gulfstream in Hallandale Beach.

As a result, approximately 25 horses at Gulfstream can resume regular training and can resume racing.

Separately Tampa Bay Downs late Monday lifted its ban on horses being able to ship in from Gulfstream and from Calder Casino in Miami Gardens. Tampa Bay Downs in Oldsmar will begin its 2016-2017 meet on Nov. 26.

The Florida DOACS on Nov. 7 placed the quarantine on one barn (Barn 5), but not on any other Gulfstream barns. No horses were under quarantine in the stables at Calder, where Gulfstream is holding its annual Gulfstream Park West meet through Nov. 27.

Under the quarantine, the approximately 25 horses in Gulfstream’s Barn 5 were allowed to train each day only between 10:00 a.m. and 11:00 a.m.  That is outside the regular training hours at Gulfstream.

Those horses also were not allowed to leave Gulfstream to race at the Gulfstream Park West meet or for other reasons.

On Nov. 11, Tampa Bay Downs announced that it would not let any horses come in from either Gulfstream or Calder until Nov. 25 or until the quarantine was lifted.

Tampa Bay’s decision had delayed Kathleen O’Connell, Gary Jackson and several other trainers from vanning horses across the state from Florida to be stabled and race at Tampa Bay during its meet.

Jackson has one horse entered sat Tampa Bay Downs on Saturday. O’Connell has no entries at Tampa Bay that day.  The Oldsmar track’s next race day will be Wednesday Nov. 30.

O’Connell will have about 50 horses at Tampa Bat this season, and about 40 at Calder. Those horses will race at the Gulfstream Park championship meet that begins Dec. 3.

“They’d already be at Tampa by now,” O’Connell said on Nov. 16. “It’s an inconvenience.  But they (Tampa Bay) are doing the right thing. We’ll ship over the day after it (quarantine) is lifted.”

Gulfstream officials have said that the horse that died from EHV-1 was trained by John Assimakopoulos.  Otherwise, Gulfstream has released no details.

None of the other approximately 1,400 horses stabled at Gulfstream are under training or shipping restrictions from that track or from the Florida DOACS.

EHV-1 is a highly contagious neurological disease with transmitted through contaminated equipment, contact between horses, and on clothing or hands of humans working with sick horses. 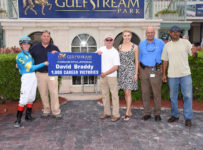