The dirt track is listed as fast and the turf course is listed as firm. Five races are scheduled for turf with the rail at 20 feet.

There are three horses to keep a close eye on: Truth, Deedeezee and Defying Gravity (photo  on home page).

Deedeezee, trained by Todd Pletcher, finished second in a one-mile turf allowance at Gulfstream on Sept. 25.

And the real question is will the very experienced Defying Gravity, who is moving up from optional claiming races, come out with her seventh straight victory in what could be a tough race for her?

The field is down to eight, following the morning scratches of Marmalade and Bygone Days.

The Weather Channel forecast is for a mostly cloudy day with a twenty percent chance of rain.

For more updated information during the afternoon, be sure to refer to our blog.

Kathleen O’Connell trains both 2-YO fillies, who ran as separate betting interests.  With Tyler Gaffalione riding, Lu Lu Laura won in 1:12.23 for six furlongs on the track listed as fast.

The win was the second for Lu Lu Laura in four career starts, but the race was the first time she crossed the finish line first.

On May 25 at Gulfstream, she made her debut and finished second 9 3/4 lengths behind Amapola.

Stewards placed Lu Lu Laura first after taking Amapola down for interference with other horses.

Lu Lu Laura is a daughter of Circular Quay. She was bred in Florida by Gilbert Campbell and is owned by Stonehedge Llc. 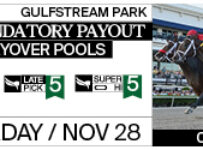