(Editor’s note—In a story early on Sunday morning, we reported that it was the day when Tampa Bay Downs would open its stables to horses for its 2016-2017 race meet. In the news release below, the Tampa Bay Downs publicity office provides details on first-arriving trainer Mike Dini.)

Mike Dini doesn’t think being the first trainer on the grounds will give him a competitive advantage when the 2016-2017 Tampa Bay Downs meeting resumes on Nov. 26.

But by 8:30 a.m. Sunday, with his 12-horse shipment comfortable inside their stalls in Barn 19, Dini recognized the benefits of setting up shop as early as possible.

“The biggest thing this time of year when you ship a horse is the heat,” he said “On a long ship, it knocks some of them out.”

“We wanted to get in here before it got hot, or you can get one or two sick,” Dini said.

Mission, it appeared, accomplished, as each of the Dini-trained horses bounced down the ramp en route to their stalls amid 72-degree bliss.

“They’re all sort of winterizing a bit – they grew some hair, so we’ll try to clip as many as we can (Monday) and they’ll start being Florida horses,” Dini said. “But it’s still cool right now, the barn area here is peaceful and quiet and the air is a lot cleaner than it is in the city. It’s a good training environment.”

Dini is among the legion of conditioners who consider the Oldsmar dirt training surface one of the best to be found.

“It’s a good track to get horses fit and ready,” he said.

The first horse to step on the grounds was Munificent, an unraced 2-year-old filly owned by the Ballybrit Stable operation of Dini’s major client, Alan Lustig.

Note—the photo on the home page is of Munificent being led off the van.

“She’s not ready to run yet, but I think she is going to be a nice filly,” Dini said.

Munificent was followed down the ramp by Quick Release, a 3-year-old Ballybrit Stable-owned filly who finished third in the Miss Preakness Stakes (Grade 3) at Pimlico in May and second, beaten a nose, in the Coronation Cup at Saratoga on Aug. 1.

Another accomplished Dini-trained and Ballybrit-owned runner to make the journey to Oldsmar was 4-year-old colt Gallery, winner of the 2015 Manila Stakes at Belmont.

They will be joined later by Bird’s Eye View, a 2-year-old colt currently getting time off in Ocala after finishing third in both the With Anticipation (Grade 2) at Saratoga and the Dixiana Bourbon (Grade 3) at Keeneland.

“We have some good horses and I think we’ll have a good meet,” said Dini, whose biggest victory in a 20-plus-year training career came in 2007 in the Kennedy Road Stakes (Grade 3) at Woodbine with the gelding Connections.

Tampa Bay Downs officials expect the stable area to be full when the 91st anniversary season resumes on Nov. 26. The track will open for training next week.

Tampa Bay Downs will simulcast the Breeders’ Cup races from Santa Anita on Friday and Saturday. 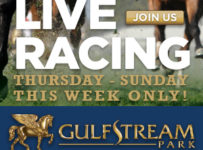