Moulton, one of trainer Todd Pletcher’s early arrivals in South Florida, will join a competitive group of locally base fillies in Saturday’s fifth  and feature race at the Gulfstream Park West meet.

First post is 1:15 p.m. for the ten-race card, at Calder Casino. Gulfstream Park is holding the meet under a lease agreement with Calder.

The dirt track is listed as fast and the turf course is listed as firm. The Weather Channel forecast is for a 25 percent chance of showers during racing hours in Miami Gardens, where Calder is located.

The fifth race is six furlongs on dirt for fillies and mares three-years-old and up. Scheduled  post is 3:21 p.m.

Moulton, a three-year-old daughter of Arch will be making just her second career start.

On Sept. 5 she won her debut by eight lengths at Monmouth Park in Oceanport, N.J., running six furlongs  in 1:11.12.  Nik Juarez, also  down for the winter, rode Moulton in that race, and has the return mount.

On Oct. 6, Moulton had a bullet four-furlong workout (fastest  of 19) at  Palm Beach Downs  in Delray Beach.

While Moulton appears to have upside, she will face four horses that at the recent Gulfstream Park summer meet finished second or first at conditions similar to today’s race.

They are competitive Player, Arella Princess, Untrue and Formal Class. All are four-year-olds.

Competitive Player is the 5-2 morning line favorite, with Moulton at 3-1.

Competitive Player is coming off a 5 ¾  length win at six furlongs at Gulfstream on Sept. 5.  She won in 1:10.14 under seven-pound apprentice Lane Luzzi, who has the return mount. 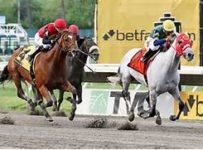