Gulfstream Park is running the GP West meet for the third straight year under a lease agreement with Calder. The meet will have 40 race days, mostly Wednesdays through Sundays, and extend through Nov. 27.

Gulfstream is asking fans to not go to Calder, but instead go to its track in Hallandale Beach, Fla., where via simulcast they can watch and wager on the GP West races.

Gulfstream has been reminding fans that there will be only limited amenities at Calder.

Calder is in the lengthy process of tearing down its seven-story grandstand building.  Thus, most of the previous area for fans is off-limits due to safety concerns.

Fans will be able to watch races near the rail. But there will be no tents or other covered structures for the public.

Here is what will be available in the area near the track: *There will be no teller stations with mutuel clerks.  *There will be approximately a half-dozen betting machines.

* There will be two walk-around mutuel clerks, who can cash tickets they sell and cash tickets bought at machines in the racing area and in Calder’s casino.  Winning tickets purchased at Calder can be cashed at Gulfstream, under the regular 12-month deadline.
*There will be a large TV in the racing area, showing the GP West races.  There will not be any other TVs around the racing area. * Calder has agreed to open to the public a small restroom building (now used by workers) near the still-intact saddling area. * During most of the race day,  a food truck is parked in an area that is near the jockeys’ building and accessible to the public. Food also can be purchased from the kitchen in the jockeys’ room.

Refreshments also are available in the casino.

*There will be a tent for trainers and owners.

Calder will have a small to-be-determined number of betting machines in its casino building, several hundred yards west of the finish line. The casino will have several TVs showing the GP West races and between-races telecasts. There will be no in-bound simulcasts  of races from other tracks at Calder.

NOTE — photo on home page is a recent view of  the Calder racing area, entering from the west. photo by Barry Unterbrink, HorseRacngFLA 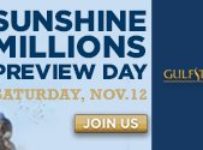