We are posting this article at 9:00 a.m. on Saturday Oct. 1, the closing day of Gulfstream Park’s summer meet.

First post is 12:00 p.m. for the 13-race program. There are eight stakes races, including the third and final legs in the four divisions of the Florida Sire Stakes (FSS) Series.

Following the posting of this story, we will shift our coverage to our blog.  Please surf on over to join us.

In addition to our race previews and coverage, we will be reporting on the wagering and on the weather.

There will be mandatory payoffs on all exotic bets-notably the Rainbow 6, Super Hi-5 and Late Pick 5.

Later in the morning on our blog, we will report on whether races are off the turf and on track conditions.

Heavy rain late Friday afternoon forced Gulfstream to move the 11th and last race from turf to dirt.  Rain continued overnight in most of South Florida.

At 8:30 a.m. light rain was falling at Gulfstream in Hallandale Beach.

The Weather Channel forecast is for rain chances ranging from 15 percent to 25 percent in Hallandale Beach during racing hours.

The co-featured In Reality Stakes and My Dear Girl  Stakes, both with $500,000 purses, drew fields of 12 and 13 horses respectively.

Those are the two final legs in the FSS races for two-year-olds.  Each race will have an unbeaten horse seeking a series sweep, and will be a big favorite for the winner’s purse of $300,000.

Those horses are the colt Three Rules in the In Reality and the filly Cajun Delta Dawn in the My Dear Girl. Both races are 1 1/16 miles on dirt.

Many owners and trainers no doubt noticed that purse money extends down to $30,000 for fourth place and to $15,000 for fifth place in each race.

In addition, owners and trainers who want to stretch horses out to 1 1/16 miles on dirt have had very few chances during the Gulfstream summer meet.

Cajun Delta Dawn has won all four of her starts. In the FSS she won the six-furlong Desert Vixen on Aug. 6  and  the seven-furlong Susan’s Girl  on Sept. 3.

Cajun Delta Dawn has the outside 13 post. That could be a major disadvantage, especially because the run from the gate to the start of the first turn is only about 100 yards for 1 1/16 miles on dirt.

But it should be noted that in all four of her starts, jockey Juan Leyva was able to get Cajun Delta Dawn to break sharply and be no worse than third at the first call.

Leyva has the mount again for trainer David Fawkes and breeder/owner Curtis Mikkelsen.

He won both races in stakes record times—and those times were fast even taking into account that Gulfstream’s track plays much faster the track at Calder where the  FFS was held from 1982 to 2013.

On Saturday, we will have previews and other coverage of the My Dear Girl, In Reality and the day’s other stakes races. The other two FSS races are:

The FSS races are restricted to sons and daughters of registered Florida-standing stallions whose owners have nominated those stallions for the program. Owners of the stallions and of  FSS-eligible horses pay annual fees to help support the program.

The Florida Thoroughbred Breeders’ and Owners’ Association (FTBOA) coordinates the program.  It joins Gulfstream and the Florida Horsemen’s Benevolent and Protective Association (FHBPA) in contributing money for FSS purses.

The other four stakes are one mile on turf with $75,000 purses.  They are not restricted to Florida breds. 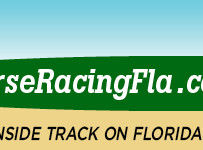