It’s all systems go for Delta Bluesman and his mission to capture the 2016 Breeders Cup Sprint.

Delta Bluesman, who races at Florida tracks during the winters, tuned up Saturday morning with a 58.0 seconds breeze for 5/8 of a mile at Monmouth Park in Oceanport, N.J.

It was in front of the watchful eye of trainer Jorge Navarro, who described the effort as “picture perfect.”

The plan now calls for a quick trip up to Aqueduct where Delta Bluesman (photo on home page) will stable in Bruce Levine’s barn. Navarro expects to get one final work in before flying Delta Bluesman to Southern California.

The $1.5 million Sprint (Grade 1) will be run at Santa Anita Park on Nov. 5. It is setting up as one of the most competitive races on the Breeders’ Cup card with defending champ Runhappy and two-time Grade I winner A.P. Indian listed as entries.

Navarro knows it would take Delta Bluesman’s best race to win. But the one-time claimer has made a career of out- performing expectations.

“I’ve kept him happy and fresh,” Navarro said. “He’s tough on a fast track. He beat A.P. Indian early this year (was later disqualified for interference) so he deserves to be there.”

The DQ was in the Decathlon Stakes at Monmouth Park on May 14.

He earned a spot in the Breeders’ Cup Sprint by winning the Smile Sprint (Grade 2) at Gulfstream Park on July 2. The Smile was a Breeders’ Cup “win and you’re in” race.

(The  photo on the home page, from Gulfstream, shows D elta Bluesman winning the Smile)

A victory by Delta Bluesman would give Navarro his first ever Breeders’ Cup win and cap off a tremendous year.

This summer Navarro won his fourth consecutive Monmouth training title, breaking a record for wins at the meet with 59. He has already surpassed his personal high marks for both wins and earnings during a racing season.

In his only other Breeders’ Cup start, Navarro finished second with Private Zone in last year’s Sprint at Keeneland. Returning from a six month lay-off, Delta Bluesman’s stablemate, XY Jet finished fifth in the Vosburgh (Grade 1) at Belmont Park earlier this month.

Navarro and owners were pleased with the performance but have decided to forgo the Breeders Cup. They are aiming XY Jet toward the Sunshine Millions Sprint at Gulfstream on Jan. 21. XY Jet won that race this year.

The long-term goal is to return to Meydan Racecourse to compete in the Dubai Golden Shaheen, a race he finished second in this spring.

Navarro said that Emisael Jaramillo will retain the mounts on both Delta Bluesman and on XY Jet.

Editor’s Note—Jimmy Goldenberg, a former thoroughbred trainer, is a national correspondent for HorseracingFLA 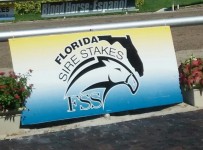